Tickets must be purchased prior to boarding the bus. Drivers cannot sell tickets or accept cash. Additionally, tickets are not date, direction, or time specific.

The safest most cost effective greenest way to travel.

Wi-Fi to keep you connected

Stay safe and healthy with our Air and Surface Purification System

Electrical outlets keep you in charge

Get tickets online or at a kiosk

Effective 07/23/2022, Rhode Island T.F. Green International Airport bus service from Hyannis and Woods Hole will be suspended until further notice. We apologize for any

Effective today, April 19, 2022, Plymouth and Brockton will allow passengers to wear a face mask at their own discretion. While we still strongly recommend

Looking for new ways to drive brand awareness or promote your company? P&B is excited to announce our advertising opportunity for 2022. By partnering with

Plymouth and Brockton is thrilled to announce that our e-ticketing platform now integrates directly with Apple Wallet and Google Pay. Apple Wallet is an app 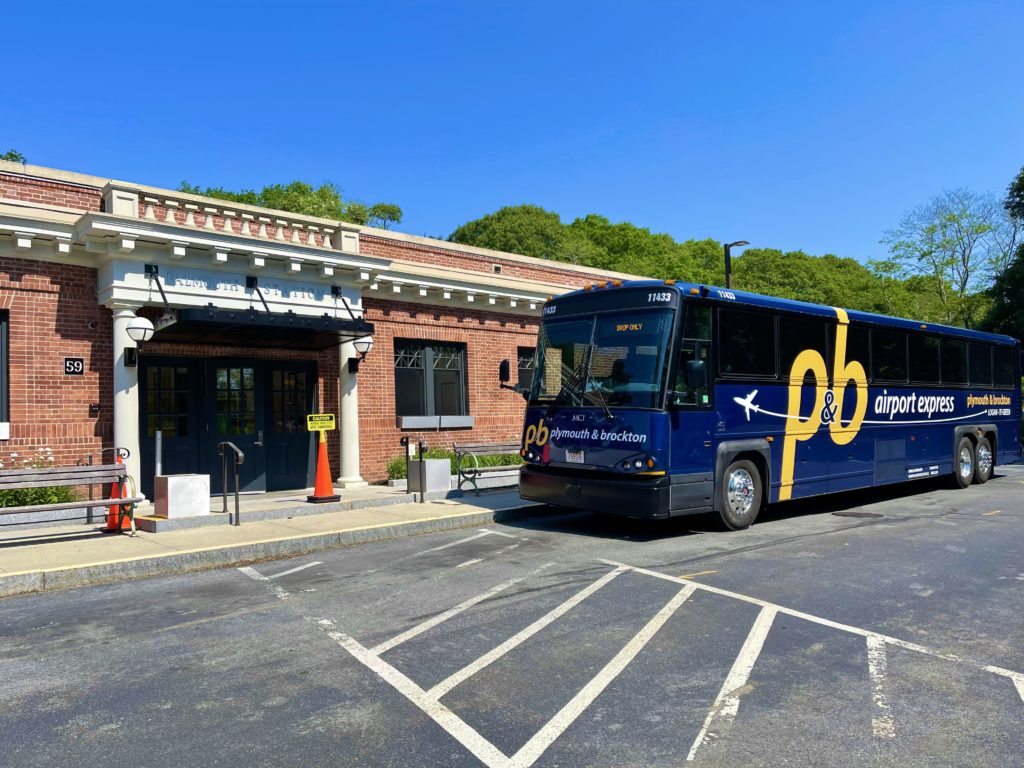 "I want to commend your driver on Sunday night's 9:00 bus from Logan to Hyannis. My daughter was on that bus, as were a couple of young Turkish women who had come to the Cape for a job in Bourne. They had the name and address of the motel where they were supposed to be staying, so they had been told that they should get off in Sagamore,. However, there were no taxis at the bus stop, and the women didn't yet have phones that worked in the U.S. The driver didn't want to leave them there, so he took them to the next stop, Barnstable Park and Ride, where I was waiting for my daughter. After some reservations on his part, he agreed that it seemed safe for my daughter and me to take these two young women to their motel in Bourne (the opposite direction from where we were headed). I wanted you to know that he was protective of them, but I'm guessing that entrusting his passengers to an elderly and a middle-aged women seemed to him to be the best alternative. He was right. We brought them to their motel and my daughter helped them register. So many thanks to the driver who did his best to insure their safety and well-being."

Anonymous
I took the 9:15 pm bus from Barnstable to Logan tonight. I'm just writing to say that the driver was soooo very nice, courteous, and helpful.

Anonymous
I just wanted to give kudos to the driver I had yesterday. We were on the 12:15 bus from Logan going to Plymouth. The driver offered to put the bus in the kneeling position since I was using a cane. It made it easier for me to climb the step and get on the bus. When I was exiting the bus, he walked in front of me down the steps making sure that I did not fall. I just wanted to let you know that he was very good!

#TravelAlert Due to the presidential visit, bus trips may be delayed arriving/departing Logan and commuting through Boston. Please plan accordingly.